Top 30 Most Dangerous And Creepy Bridges In The Entire World When you start looking at the world’s bridges, it’s clear that some of them are quite terrifying!

Here are the most terrifying and dangerous bridges in the world. Some might not have the proper safety features, others have steep slopes, and you might have to go to stomach-churning heights!

The Royal Gorge Bridge in Colorado

Colorado is home to a fun amusement park at the edge of Royal Gorge, but you can also get a thrill from the Royal Gorge Bridge. It stands at 959 feet over the Arkansas River and is the highest known suspension bridge in the US! 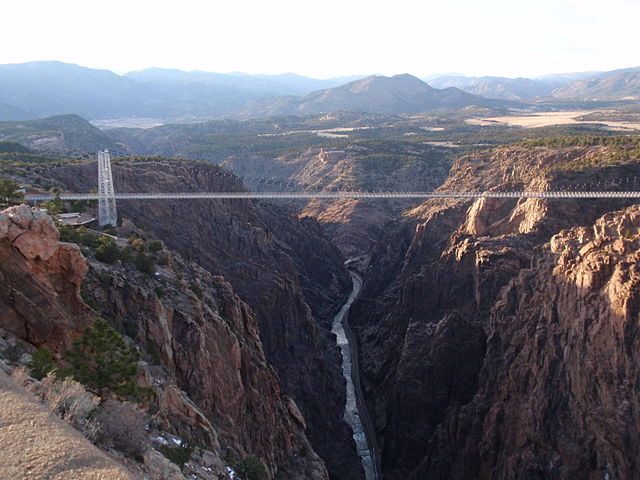 The Royal Gorge Bridge In Colorado

The Lake Pontchartrain Causeway connects Mandeville and Metairie, and you’re committed once you start. It’s about 24 miles long, and there’s nothing but water around you. Make sure you’ve got plenty of fuel and use the restroom before you start crossing!

The Sunshine Skyway Bridge in Florida

Florida is known for being surrounded by water, and there are over 4,000 islands. Therefore, there must be plenty of bridges, but the Sunshine Skyway Bridge is quite scary, as it’s over 4 miles long! 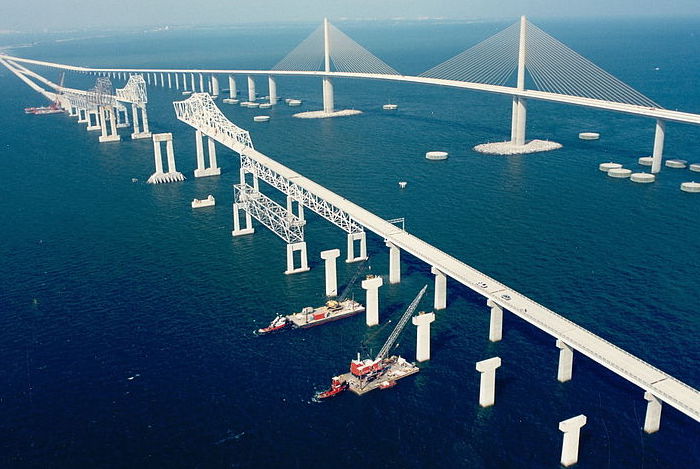 The Sunshine Skyway Bridge In Florida

While there are beautiful oceans in the area, Mexico is also home to a scary suspension bridge called Puente de Ojuela. It was built in the 1800s and spans a huge gorge. It’s now a tourist attraction for people who want the thrill!

The Kawarau Gorge Bridge was constructed in the 1800s and is necessary to get across the Kawarau River. You’re suspended about 141 feet in the air, but you could also try bungee jumping off it if you’re not too scared! 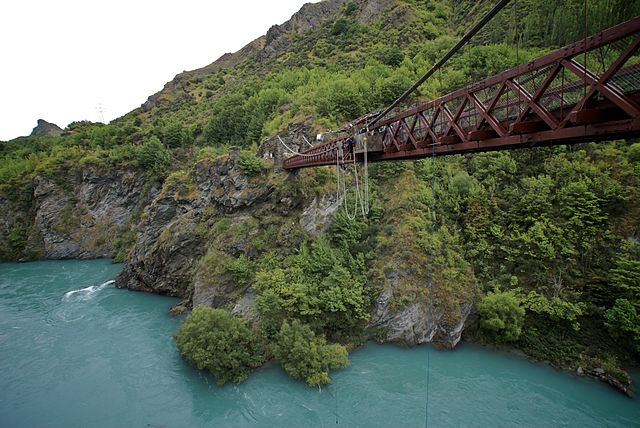 The Trift bridge spans 600 feet and is a pedestrian-only suspension bridge. The views are amazing, but it can get freaky when the wind blows. Plus, it stands 328 feet high and required more stabilization in 2009.

The Swiss people sure aren’t afraid of heights! The Titlis Cliff Walk is one of the highest bridges in Europe because it’s raised 10,000 feet off the ground and stretches across the entire Swiss Alps. However, it does offer high railings and safety mesh. 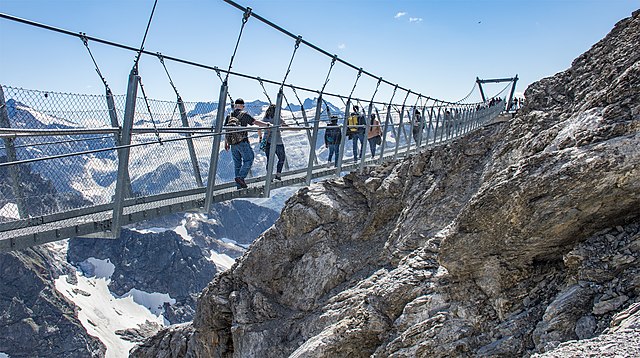 Costa Rica has 1.7 million tourists each year, and many of them like to go horseback riding, hiking, and kayaking. However, you can also experience the area on a whole new level. Called the hanging bridge, the railing and metal floor are a bit creepy!

Ireland’s coast is a big tourist attraction, and if you feel particularly adventurous, you can walk the Carrick-a-Rede rope bridge. It links Carrickarede to the mainland and sways in the wind because it’s 100 feet over the water. 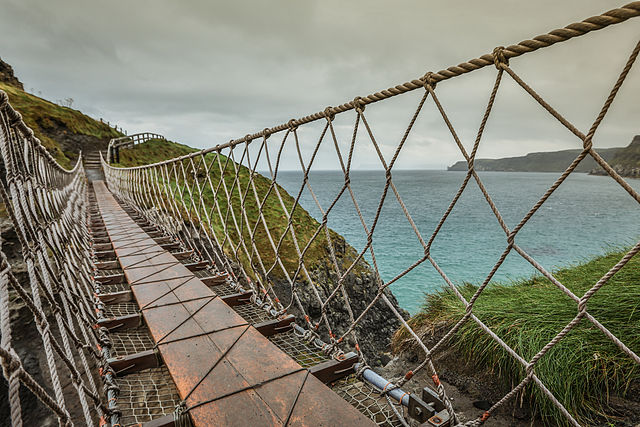 With majestic mountain ranges like the ones in Pakistan, there are bound to be tons of bridges. Among them is the Hussaini Hanging Bridge, which seems pretty sketchy. Even with the rusted wires and uneven boards, people tempt fate and go across!

While there’s a rope to hang onto, and the planks aren’t far apart, you are still 4,000 feet over the canyon when using the Ai Petri Bridge. Plus, it’s in the Crimean Mountain Range, so you know there are high winds. Just don’t look down while crossing! 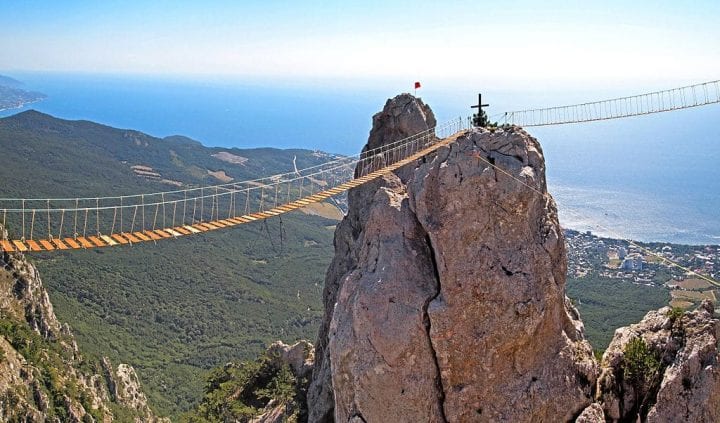 The Bridge of Immortals in China

Huang Shang is the home for Yellow Mountain, and it contains the Bridge of Immortals. It offers passage to other granite peaks and isn’t long. However, the view of what’s below can take away your breath. Still, the trek of getting there might be more dangerous! 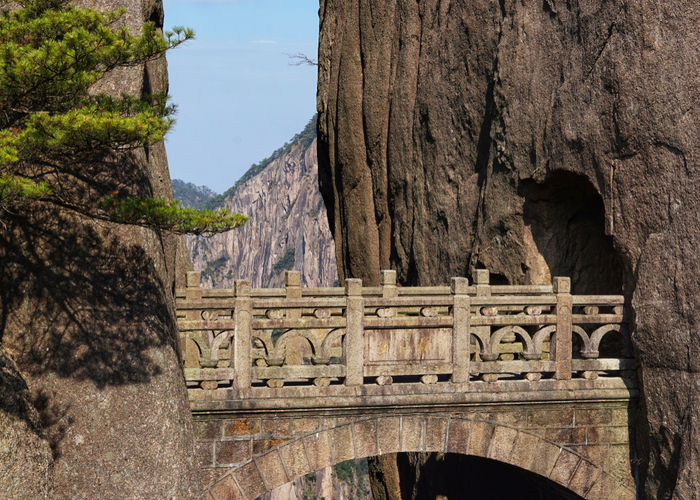 Most people feel confident when the bridges are made using modern materials. However, that’s not the case with the Iya Kazurabashi Bridge. It’s built to cross the Iya-gawa River and uses wooden planks that aren’t even close together (sometimes a whole foot apart!). 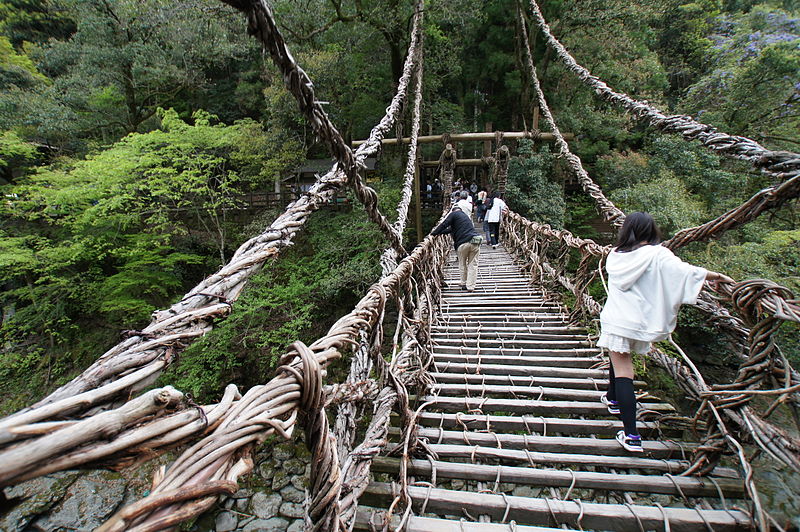 Could you imagine a bridge made of grass braids? That’s pretty much what you get when you cross the Keshwa Chaca Bridge over the Apurimac River. One good thing is that the residents here reconstruct it each June, so you are probably safe.

Imagine a bridge that can’t stay up throughout the year, and you’ve got the Ko Paen Bamboo Bridge, connecting Ko Paen and Kampong Cham. Residents must use 50,000 bamboo sticks to make the 3,300-foot bridge at the start of each dry season (December). Then, it’s taken down before May to store for later use. 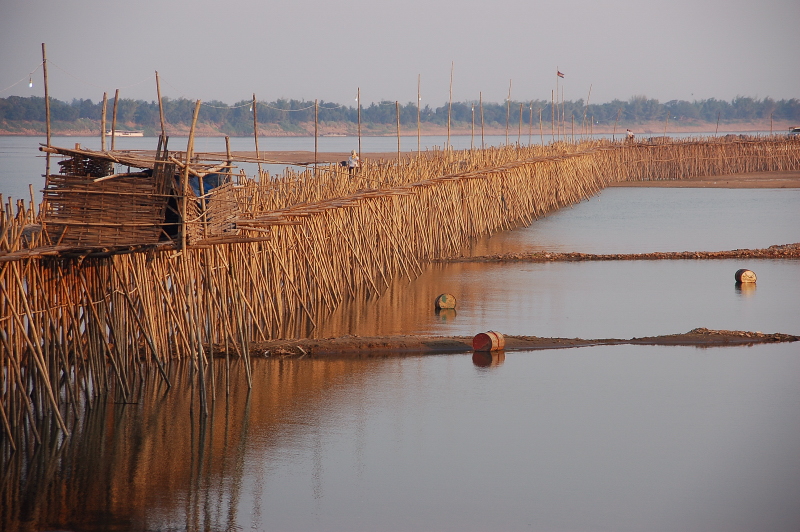 The monkey bridge is quite popular in Vietnam. They are built to help you cross rivers, but they have no modern features like concrete or metal. In fact, they’re handmade and made of tree logs or bamboo that’s balanced precariously and then tied together.

Many of the bridges in India are made from natural surroundings. Residents rely on the tree root system to make crossings for streams and rivers. However, the height and insects living on them might make you want to turn around, even if there’s no other solution. 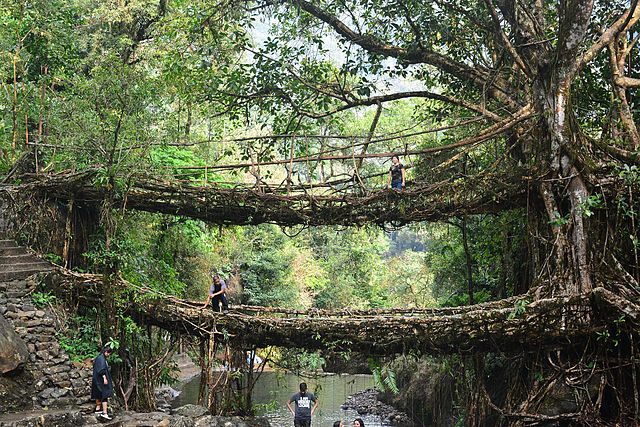 One hanging bridge is housed many feet high right in the Malaysian forest. It’s only wide enough for one person and is 1,700 feet long. All that holds you up is a wooden plank, rope, and metal meshing. Try focusing on the beauty instead of how far it might take to fall.

Nepal has many hanging bridges for pedestrians because of its Himalayan peaks, and most of them are higher than people want. The Hanging Bridge in Ghasa is like that. There’s mesh to hold you up, but the height and high winds make you wish you were on the ground. 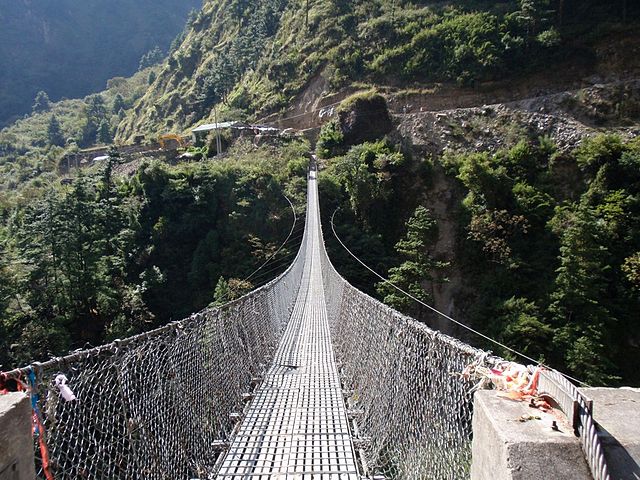 The Canopy Walk Bridge is about 2 miles long and over 100 feet in the air. Still, the series of bridges takes you to parts of the jungle that only monkeys and birds can see. At least it has aluminum wires, safety mesh, and sturdy wood planks!

The Glass Bridge in China is located in the Shiniuzhai National Geological Park and has a metal base, metal railings and mesh, and metal cables with a glass-plate floor. That way, you can see the ground. Though it’s quite high, people flock to it for a thrill! 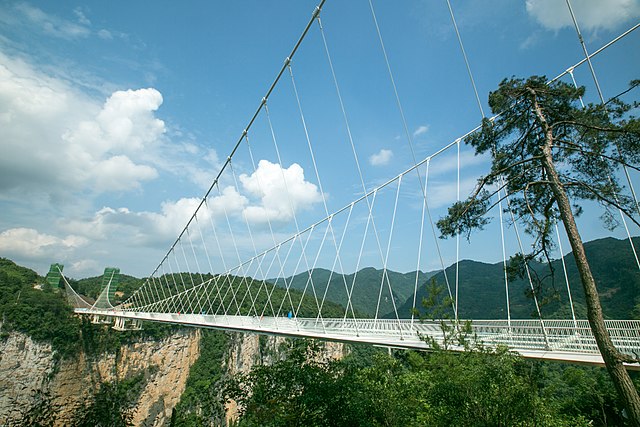 The Capilano Suspension Bridge is in Vancouver, Canada, and has metal fencing with a concrete base. However, the bridge stands 230 feet over the Capilano River and is 460 feet long, making it a little creepy to use.

The Storeisundet Bridge is actually the longest of eight, making up the Atlantic Road. Some residents call it the road to nowhere or the drunk bridge because it has a disorienting nature. It looks to end abruptly, making it hard to drive on it! 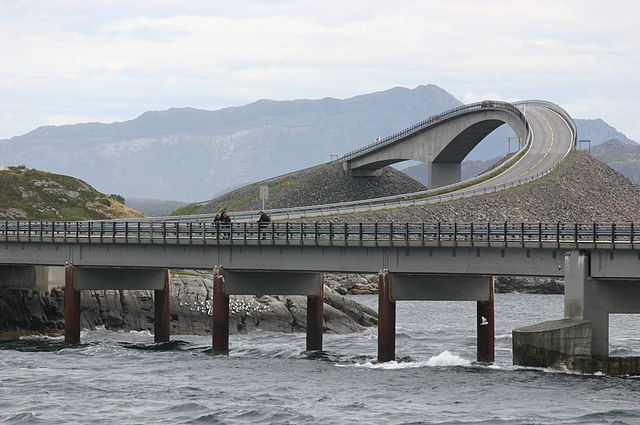 This short suspension bridge might not be all that bad if you don’t know of its engineering. However, it sits right over a fault line. Builders used rock at one end to secure it so that it doesn’t rip out of the mountain during an earthquake!

Costa Rica has many adventures that you might want to try, but the Quepos Bridge might not be one of them. It was built back in the 1930s as a way to transport bananas, but only one vehicle can pass at a time. With that, it looks very creepy. 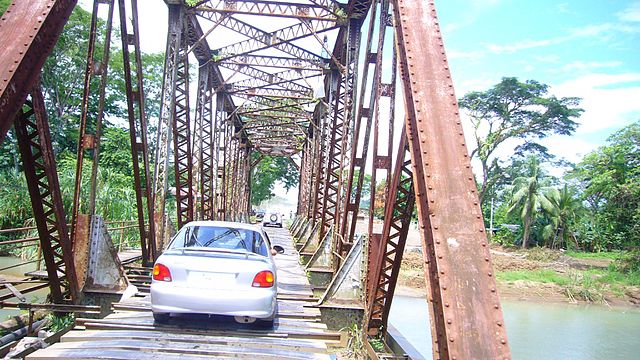 The Millau Viaduct is a cable-stayed, multi-span bridge built in 2004 and is considered an architectural feat. It stands over 1,000 feet over the ground, which is 60 feet taller than France’s Eiffel Tower. Plus, it’s 8,000 feet long!

The Langkawi Sky Bridge isn’t just a walkway or bridge; it’s actually a pedestrian cable bridge. You can take the incline lift to the bridge deck, which is about 2,170 feet high. From there, just appreciate the wonderland that most people are too scared to see.

The Deception Pass Bridge connects Fidalgo and Whidbey Islands. However, the scary part here is the fog over the lake. While you’re traveling on it, you can only see a few feet away, and that’s pretty creepy.

The Seven Mile Bridge is actually just shy of 7 miles long, but it connects Little Duck Key and Knight’s Key. On this highway, you can enjoy seeing the Atlantic Ocean and the Gulf of Mexico. However, it’s best not to travel it on a stormy day!

Moses Bridge in the Netherlands

Many bridges are built over water, but that’s not true for the Moses Bridge. It was put in during the Netherlands’ Eighty Years War and was a water-based defense. Now, visitors can walk below the waterline to get to Fort De Rovere.

The Wolchulsan National Park is quite small and found in South Korea. However, to get to it, you must use a steep bridge called the Cloud Bridge. While it’s perilous, visitors seem to be attracted to it based on its reputation.

Do you want to feel an adrenaline rush? If so, then the Windsor Bridge is ideal for you. This suspension bridge is in Gibraltar and lets you see the entire town that’s 50 meters below! That’s just crazy!

This bridge doesn’t use side rails, even though it’s frozen for much of the year. Only a handful of people have crossed successfully in Russia’s history. Still, adrenaline junkies come from all over the world to take on the challenge!